Update on the partnership between EF and UNICEF

How it started, how far we’ve come, what’s next

Since 2019, we have supported UNICEF’s CryptoFund with recurring contributions, and we are excited about our most recent donation too. Today, I would like to share the story of our journey together, to recognize some of the achievements of our partnership, and to speak a bit more about what’s next.

Why and how we started

In a previous blog post, I explained how emerging economies represent a huge opportunity for Ethereum, and talked about the importance of asking ourselves “who would most benefit from Ethereum?”

People living in emerging economies represent billions of next-generation users and developers of Ethereum. The next question should then be: “how do we reach the next billion?”

The Ethereum project started with a small group of people on a shared mission, and today the project has attracted hundreds of thousands of like-minded developers and researchers. This like-mindedness was the power that aligned the community, but we should admit that it also created natural barriers to entry for those who were not connected with someone in the community. Because of this, I was always aware that the Ethereum community was lacking the true diversity needed to maximize the technology’s real potential, and to reach the next billion.

Around the end of 2018, I was seeking opportunities to expand our reach when I met Chris Fabian from UNICEF Ventures (who now leads the Giga project, which we also support). To be honest, ahead of our first meeting, I had doubts about whether EF would work well with a team from the United Nations. I felt they were a very traditional, big organization with conventional ways of doing things. But Chris shared a couple of lists of goals that they wanted to achieve using blockchain technology, and that blew my mind.

He and his team understood the importance of public blockchains, as well as the tradeoffs of various protocols. This was the moment when I felt confident that there was an opportunity for both groups to have an impactful partnership. UNICEF has a network, and resources that we did not have, with ongoing work in more than 190 countries, and collaboration with diverse stakeholders including NGOs, businesses, startups, and governments. They were also looking for new ways to change from the inside, and to embrace innovation. This is how our collaboration started, and from there we began to support the UNICEF CryptoFund, which was announced and launched at Devcon 5 in October of 2019. 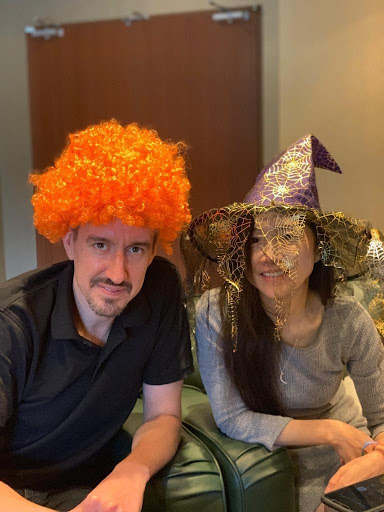 Chris Fabian and I at Devcon 5, which coincided with Halloween. The UNICEF Ventures team spent a sleepless night coordinating with the Headquarters for the launch of the CryptoFund.

It was natural for the EF to become the founding donor to the UNICEF CryptoFund given our collaboration. The CryptoFund is the first vehicle in the entire UN ecosystem - and possibly the public sector at large - to receive, hold, and use crypto, and it makes investments in support of technology startups within developing countries that are aimed at improving the lives of children. These startups receive tokens and use them without converting to fiat currencies, within the goal of developing open-source, digital public goods. To date, 2,527 ETH and 8 BTC have been contributed, and 18 investments have been made.

At the same time, the CryptoFund is trying to tackle a key challenge for organizations like UNICEF - one of transparency and accountability. Traditionally, donors and other stakeholders don’t have access to a real-time, tamper-proof view of how a charity spends its money. In the case of the CryptoFund, every transaction the CryptoFund makes is visible on its website with a corresponding link containing immutable transaction details on blockchain explorers. 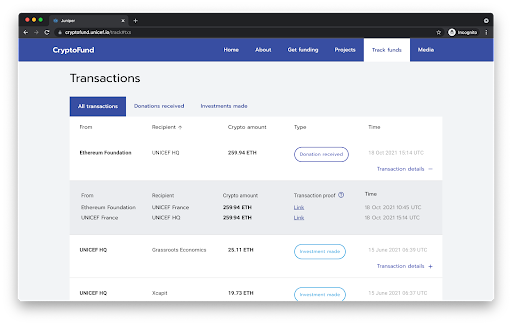 In the image above, you can see the EF’s most recent donation - received first by UNICEF France and then transferred to the UNICEF Headquarters.

The CryptoFund website is powered by Juniper, an open-source set of tools developed by UNICEF Ventures to help manage digital assets. Any public sector organization that wants to leverage tokens in a user-friendly, transparent way, can experiment with Juniper today.

Many of the 18 startups that have received a CryptoFund investment use blockchain-based technology in their products as well, and we will continue to support them through workshops, and by connecting them to wonderful talents and projects in the Ethereum ecosystem. You can read more about these startups developing open-source, digital public goods here.

I cannot emphasize enough how influential this project has been -- not only for the humanitarian sector and governments, but even to the world. It has raised awareness and let the public see how it is possible for a large, established and international organization to adopt public blockchains in efficient and transparent ways. I have heard so much positive feedback and truly hope that other traditional organizations like UNICEF feel more confident making use of these public goods too.

While we continue our support for the CryptoFund and its portfolio companies developing digital public goods in emerging economies, EF’s collaboration with UNICEF is evolving. Through the new EF Fellowship Program, we are supporting two exciting developments. One EF Fellow - who represents a CryptoFund portfolio company - is working with many national and municipal governments in Latin America to use blockchain in digital identity and verifiable credentials. Another EF Fellow is exploring the intersection of internet connectivity and blockchain, working with Giga, which is a joint initiative by UNICEF and the International Telecommunications Union (ITU) aimed at providing internet to every school in the world.

I am excited to share more about their work in the coming months and look forward to expanding our reach to the next billion through our continued partnership with UNICEF. In the meantime, you can find them on Twitter: UNICEF Innovation (which manages the CryptoFund), UNICEF France (which was the first national committee to use crypto) , and Giga. 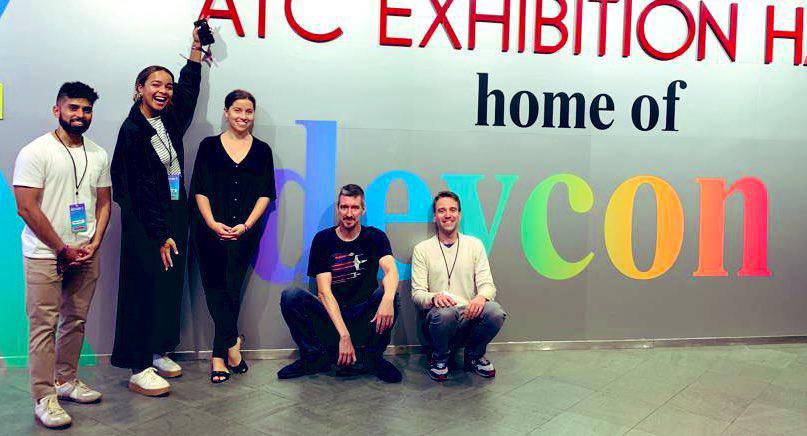 Lastly, I would like to send my deepest appreciation to Sunita Grote, who leads the UNICEF Venture Fund, Christina Rose Lomazzo, UNICEF’s blockchain lead (as well as Mehran Hydary, Cecilia Chapiro, and others who were part of the journey together), and to Chris Fabian, for pushing the needle together for these important steps.